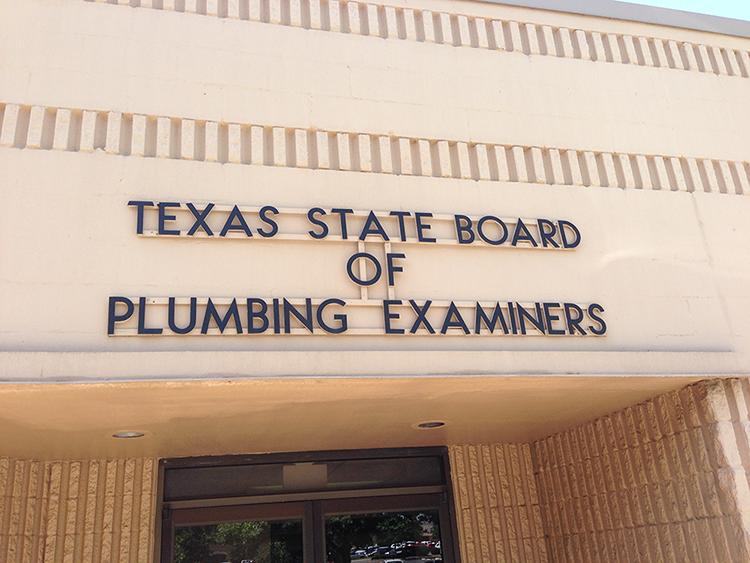 New Members of the Texas State Board of Plumbing Examiners

Texas Governor Greg Abbott named six new members to the TSBPE, including a new chairperson, filling all of the vacant and expired seats. As Texas plumbers process the announcement of new Board appointments today, here is a list of all 9 members by their respective seats (defined by law) and staggered expiration dates:

Here is the official announcement from the Governor with a short bio for each new member.

AUSTIN – Governor Greg Abbott has appointed James “Ron” Ainsworth, William “Bill” Klock, and Mark Savasta to the Texas State Board of Plumbing Examiners for terms set to expire on September 5, 2023. Additionally, the Governor appointed Frank Denton, who was named chair of the board, [David “Dave” Yelovich], and T. “Justin” MacDonald for terms set to expire on September 5, 2025. The board licenses master plumbers, journeymen, plumbers, and plumbing inspectors.

James “Ron” Ainsworth of Midland is a licensed Master Plumber and CEO of The Bosworth Company, LTD. He is a member of the Nexstar Network. Ainsworth attended Midwestern State University.

William “Bill” Klock of Austin is a mechanical engineer and serves as the vice president and chief technical officer for EEA Consulting Engineers. He is a former director and regional chair for the American Society of Heating Refrigerating and Air-Conditioning Engineers. Klock received a Bachelor of Science in Mechanical Engineering from the University of Illinois at Urbana-Champaign.

Mark Savasta of Houston is the city building official for the City of Houston. He is a member of the International Code Council. Savasta received a Bachelor of Science in Construction Engineering Technology from the University of Southern Mississippi and a Master of Business Administration from American Intercontinental University.

Frank Denton of Conroe is the owner and president of the Denton Investment Corporation. He is a former commission chairman of the Texas Department of License and Regulation and a former member of the Texas Medical Board and Texas Association of Business. Denton received a Bachelor of Business Administration from Sam Houston State University.

I had the privilege of being introduced to Frank Denton (Chairman) before his first meeting and have spoken with him several times, including hosting him for a 2-hour conversation in our recent Houston RMP course.  Here are a few of the most relevant points from my perspective:

Frank realizes not everyone will like change, but change must happen for the TSBPE to survive.  We have made ourselves available anytime we can help and already appreciate the opportunity to speak candidly with him about the issues currently in play.

I am glad that TSBPE is going to continue it’s role in the plumbing industry, we do need more inspectors to keep down the unhealthy plumbing installations that are happening in our state, and the operation of people who are preforming installations and repair of existing installations, I have been in the plumbing trade in Texas for around fifty years , and have attended Winn’s cont. edd. classes over the years, over all our plumbing and Mechanical companies are doing a good job, and God Bless Texas, 🙂