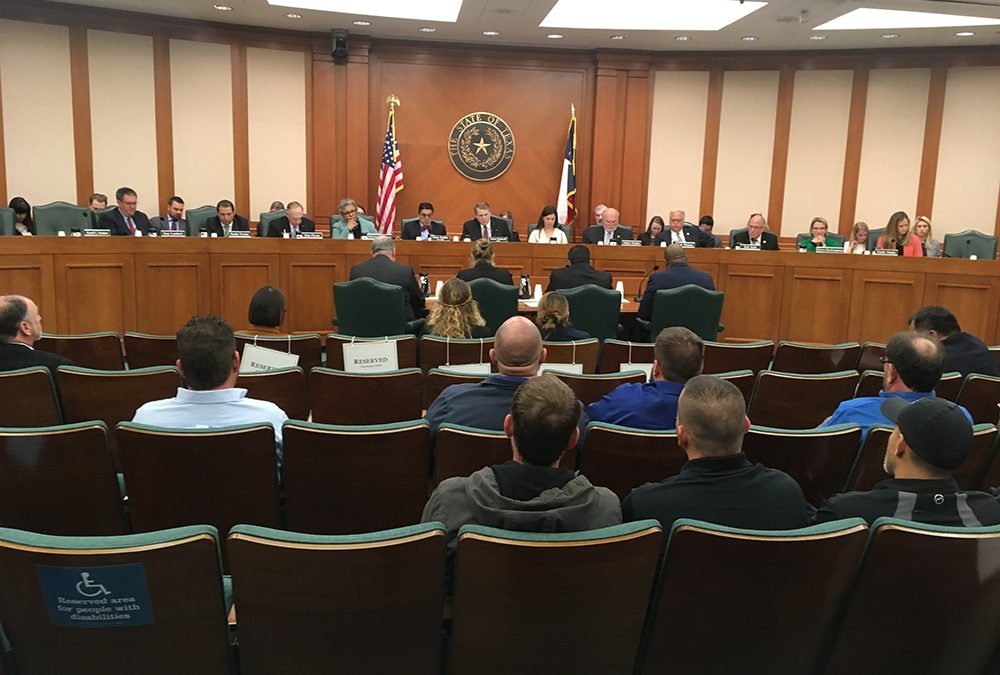 The Plumbing Sunset Bill did not pass the Texas Legislature.  No “Lifeboat” bill was passed to extend the regulation temporarily, so TSBPE & Plumbing regulation was scheduled to expire on September 1, 2019.  Texas Governor Greg Abbott issued an executive order to the extend the TSBPE and plumbing regulation using ongoing disaster recovery from Hurricane Harvey in 2017 as the legal basis.

The following timeline outlines major activities related to the Texas Sunset Advisory Commission’s review of the Texas State Board of Plumbing Examiners (TSBPE) and subsequent related activities in the Texas Legislature.  Links are provided to the key websites, documents, and other relevant sources.  Because of the magnitude, this comprehensive resource is available without charge.  Please considering joining the Trade Professionals Network and help us ensure an effective plumbing industry for the State of Texas.

Contacting Elected Officials
Texas plumbers may contact their State Representatives and Senators to convey opinions regarding the Sunset Recommendations.  Elected officials are more open to residents of their district and respond more positively to professional communication (rather than profanity or uninformed rants).  Don’t be surprised to learn there is not uniform outrage or agreement with the Commission’s recommendations.  The plumbing industry of Texas is incredibly diverse and plumbing leaders will be actively promoting conflicting opinions.  You may find out who represents you and how to contact them HERE.

June 13, 2019: Governor Greg Abbott issued an Executive Order “to prevent the imminent abolition of the Texas State Board of Plumbing Examiners and expiration of the Plumbing License Law on September 1, 2019, and to delay that abolition and expiration until disaster needs subside or the 87th legislature addresses the matter. To facilitate the legislature’s consideration of the issue, this suspension shall have the force and effect of law until May 31, 2021.”

May 22, 2019: Both chambers agreed to a conference committee and assigned members.

May 20, 2019: The Senate refused to concur with the House amendments.

May 15, 2019: The House of Representatives approved the Senate’s Approved Sunset Bill (SB621) after adding two amendments:

April 23, 2019: The House of Representatives Licensing & Administrative Procedures Committee recommended SB 621 to the full House without amendment (see details of that amended bill below on April 3rd).

April 9, 2019: The Texas Senate Sunset Bill (SB 621) was referred to the House of Representatives Licensing & Administrative Procedures Committee, where the House could pick up the final Senate version of the Sunset Bill or vote on their own version which has been left pending since its public hearing.

April 3, 2019: The Texas Senate passed their Sunset Bill (SB621) related to plumbing regulation after three amendments were passed and one was tabled.  The amendments are summarized as follows:

March 19, 2019:  The Senate Committee on Business & Commerce voted 6 to 2 to recommend the Sunset Bill to the full Senate for consideration. However, several amendments were also introduced to be considered by the Senate, including continuing the TSBPE with quarterly reports to the Sunset Commission, removing the Contractor License proposal and maintaining the current RMP structure, revisiting the general vs direct supervision requirements for plumbing, having the Governor appoint the TDLR Plumbing Advisory Board rather than the Executive Director (if plumbing moves to TDLR), plus a few other technical language changes.

March 12, 2019:  Both the House and Senate Bills were opened for their last public testimony during committee meetings in the State Capitol.  After hearing the testimony of anyone who wished to speak as well as asking questions of the Sunset Commission Project Manager and the Executive Director of the Texas Department of Licensing & Regulation, both bills were closed for public comment and left pending for final committee debates and votes to be scheduled at later dates.

March 4, 2019:  Both the House and Senate Bills have been assigned to their respective committees, where they await scheduled hearings:

February 27, 2019:  A duplicate bill was filed in the Texas Senate by Senators Nichols, Birdwell, Buckingham and Hall.  Because it is a mirror image of the House Bill, there are no new issues to communicate, but the full version of that bill may be found HERE.

February 25, 2019: The Sunset Staff worked with the Texas Legislative Council to draft a bill implementing the Commission recommendations. Representative Lambert filed the House version of the bill which may be found HERE. Because this is simply formalizing what was already known from the Sunset Advisory Report of final recommendations, there isn’t a lot of new information. However, it does put some framework around the transition from an RMP to a Plumbing Contractor (which will be essentially the same thing), when direct vs general supervision of apprentices is required based on their experience and training rather than the current apprentice endorsements (Board/Commission Rules will still have to address the details), reciprocity with other states, and the requirement for fingerprint background checks (which will apply to all licensees by 2023).  This Bill will now make its way through the committee hearing process and a similar process will eventually commence in the Senate (we will provide updates here as each step is scheduled).

Sunset Commission Final Recommendations
January 9, 2019:  After individual Sunset Commission members proposed changes to their staff’s report, the full Commission met on January 9th and finalized their recommendations to the Texas Legislature.  Meeting updates, details, final agenda, and archive video of the meeting may be found HERE.  Of greatest interest to Texas Plumbers is the Commission’s final recommendation that the regulation of plumbing be moved from the TSBPE to TDLR effective September 2020.  Their recommendations will become a “Sunset Bill” which must make its way through the House and Senate, including their committees, until arriving on the Governor’s desk for final approval.

TSBPE Supplemental Response
December 20, 2018:  A recurring theme during the December 12th Sunset Hearing was the TSBPE’s failure to address concerns that existed in its last Sunset Review during 2002.  As a result, the TSBPE issued a Supplemental Response & Agency Action Summary for the Commissioners to consider before making their final recommendations on January 9th.  The TSBPE’s report may be downloaded HERE.

Sunset Commission Public Meeting
December 12, 2018:  The Sunset Advisory Commission held a public hearing on their staff’s recommendations.  The meeting was held in the Senate Finance Committee Room, E1.036, Capitol Extension, 1400 Congress Avenue in Austin.  44 plumbers registered to speak after testimony by the TSBPE Chairman, another TSBPE member, and the TSBPE Executive Director.  The Executive Director of TDLR was also available to answer questions on several occasions but did not testify in the traditional sense.  You may watch a recording of the entire hearing HERE and begin at 2:45:30 (the TSBPE portion of the hearing lasted over 4 hours).

TSBPE & TDLR Staff Responses
November 28, 2018:  The formal responses to the Sunset Report by the staffs of the TSBPE and TDLR are now available, as are all public comments submitted by interested parties by Monday’s deadline.  Click the links above to read each report and all of the public comments.  As you will see, regardless of the TSBPE/TDLR decision, plumbing regulation in Texas is about to change dramatically.

Submit Online Comments
By November 26, 2018:  Individual responses to the Sunset Staff Report may be submitted online until November 26th.  Any responses received by that date will be included with the staff report for consideration by the Sunset Commission members.

Sunset Analysis & Perspective
November 18, 2018:  We prepared an analysis of the Sunset recommendations, described likely outcomes, and outlined appropriate next steps.  The 6 page report may be found HERE.

The Trade Professionals Network took several steps in developing this analysis, including:

TSBPE Response Meeting
November 14, 2018:  The TSBPE met in a special called session during which they discussed and agreed upon the agency’s response to each Sunset Commission recommendation.  Their final response was issued on November 28th (see above).

Sunset Staff Report
November 09, 2018:  The Texas Sunset Advisory Commission issued its staff report which recommended a massive overhaul of the Texas plumbing industry, including the merger of the TSBPE into the Texas Department of Licensing and Regulation (TDLR) and several other important recommendations.  The Sunset Staff report as well as TSBPE Self Evaluation report may be found HERE.

TSBPE Self-Evaluation
September 30, 2018:  As the first step in the Sunset Review process, the TSBPE issued its self-evaluation report, describing the agency, challenges, opportunities, and effectiveness.  The full report may be found HERE.